Microsoft launched UltimatePC which is their new website where Microsoft will be hosting “blueprints” of the best PCs available and exactly what you can achieve with them.

There is a small section at UltimatePC.com called “Ultimate Exclusives”. According to Microsoft these are not replacing Ultimate Extras. The reason given for the poor amount of extras is the high amount of testing and quality required for them to ship. 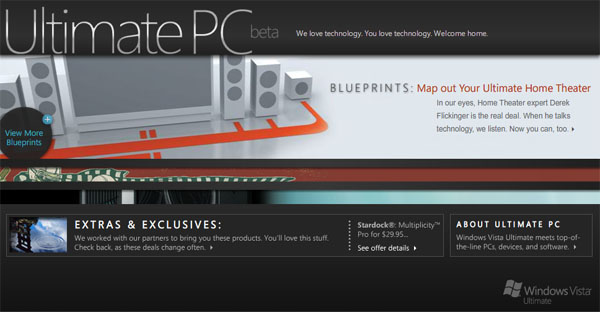 Now WindowsUltimate.com will be directed to UltimatePC while Microsoft teams up with various partners to offer discounts to ultimate customers. It’s not clear how they will ensure only ultimate customers have access to the discounts.

Until Microsoft start providing a time line about Ultimate Extras this is little more than a marketing site with little benefit to those who have paid a premium price for a poker game and to play videos as desktop Wallpapers. Hopefully the new site will provide a place for the ultimate team to communicate to the community its current and future plans.