A picture comparing Apple’s iPhone with the iPhone Nano which is supposed to come out in October 2008
was published on Flickr. The iPhone Nano, as usual, will be smaller than it’s first generation predecessor but also cheaper retailing for a price of $300 or less.

The iPhone Nano will have a smaller 2,75″ screen compared to the 3,5″ screen of the iPhone Classic.  According to this comparison it will not offer Internet access which is a huge drawback if you ask me. It is still multi-touch and combines a phone and music player in one device but will only ship with either 4
or 8 Gigabytes of Ram compared to the 8 or 16 Gigabytes of the classic iPhone.

I personally can’t see that the iPhone Nano will be highly successfully especially if you consider that it will not have Internet and less storage. Do you think it is a wise move to remove Internet from the iPod Nano ? Let me know. 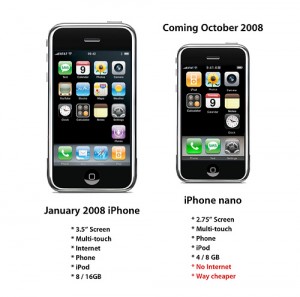