Dell has announced that is adding a number of laptops and desktop machines with the Linux operating system Ubuntu 8.04 installed.

According to a blog by Anne Camden, the Inspiron 1525, the XPS M1330 and the Inspiron 530 desktop machine are now available with the operating system, which is also known as Hardy Heron.

This article describes how to install internet explorer on ubuntu. Internet Explorer is necessary for certain class of users, especially web developers and designer. For these users, they need to test their web pages on internet explorer, since majority of the users still use IE. So people who use linux still log in to windows machine for IE. Here is an oppurtunity to move those kind of user completely to Linux.

How to install Internet Explorer on UbuntuRead More »

Adobe AIR (Adobe Integrated Runtime) is still in alpha, though, according to InfoWorld and the new version will mean AIR now runs on all three major OSes – Windows, Mac and Linux. Due to its alpha status, AIR for Linux might not be able to run all the apps already working on the other versions.

If you’ve always wondered at the logic of running an anti-virus program within the operating system that you think might be infected, NEC might just have the answer.

Betanews has unearthed evidence that the company is about to launch a new range of notebooks featuring a ‘hypervisor’ built-in to the BIOS from Pheonix Technologies.

Over the last few years, LinuxWorld has become the trade show for Linux, the business, rather than Linux, the community. This year, the show will include a blast from the past as it will include a massive install-fest.

Untangle, an open-source network gateway company, is sponsoring the 1,000 plus computer install-fest. This “Installfest for Schools of 2008” will take place in the exhibit hall of the LinuxWorld Conference August 4-7 at San Francisco’s Moscone Center. The even is also being sponsored by LinuxWorld and the ACCRC (Alameda County Computer Resource Center ) with additional support from Ubuntu, Canonical, and Mozilla. 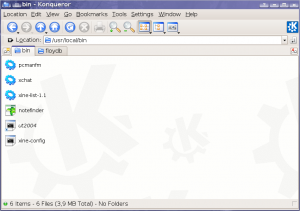