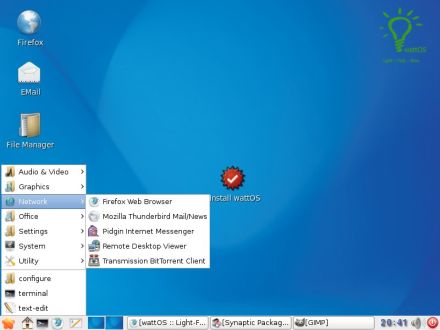 WattOS is a new Linux distribution that’s based on Ubuntu, but designed for low-power machines. It has low system requirements, which means you can run it on older hardware. But the developers are also hoping to build advanced power management features into the OS so that you’ll have a full Linux desktop experience without consuming much power (by today’s computer standards).

WattOS is currently available as a public alpha, which means there’s still a lot of work to do, but the operating system is perfectly usable, if a little rough around the edges. It comes with a stripped down set of applications. For examle, instead of OpenOffice.org you get AbiWord and Gnumeric. But WattOS supports apt-get and the Synaptic Package Manager, which makes it easy to add additional applications.